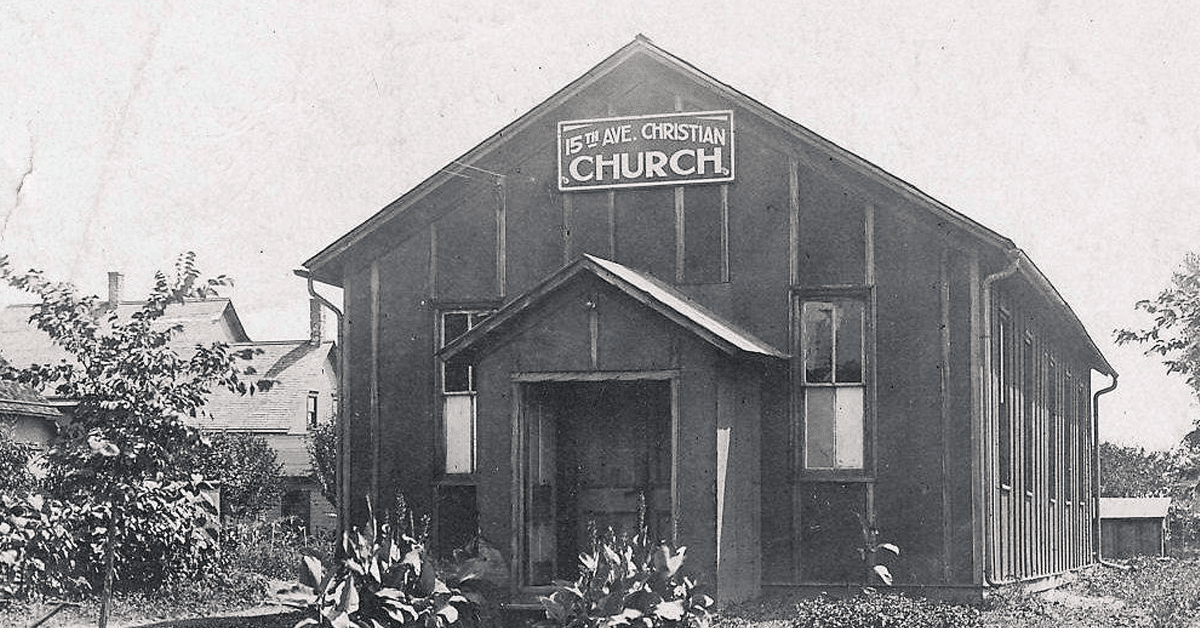 A small group of Christian’s men and women who first saw the need and future possibilities of a church on the Hill, severed their own church connections to bring this church to the Hilltop. Dr.J.H. Nichols first conceived the idea of giving the Hilltop community a Sunday school for the youth who clearly needed it.

The first meeting was held March 6, 1910 with fifty-two people in attendance with Dr. Nichols as the first superintendent. Shortly after the organization of Sunday school the Rev. E.T. McFarland, pastor of the Memorial Christian Church held an evangelistic campaign, which resulted in an increased interest of the people of the neighborhood. Rev.W.B Slater, pastor of the Moline Christian Church also gave services in a similar manner.

On a lot located on 14th Avenue between 43rd and 44th streets, a temporary building was erected 25′ X 60′. Rev.E.A. McFarland gave services there. March 1913, two lots at the corner of 15th Avenue and 36th street was purchased and the building at 14th Avenue and 43rd street was moved down 14th avenue to the new location.

A basement room 25 feet square was built and used for primary and beginners departments of Sunday school and for social activities. In the summer of 1913 a group of people interested in the “Mission” decided that a church should be organized and petitioned the Memorial Christian Church for a transfer to the new organization.

On June 14, 1913 the Fifteenth Avenue Christian Church was organized by J.Fred Jones, secretary to the Illinois Christian Missionary Society and forty transfers from Memorial Christian Church as charter members.

Recorded earlier in the church history, one Sunday morning the 25′ X 60′ building was crowded with 406 adults and children. Thoughts of a new building were in order. A building fund was established on June 4, 1921 and an old-fashioned “dig day” was held and work began on the basement of the projected building. Work was done by members, people from sister churches and strangers. The first phase was completed on November 13, 1921 including a roof over the basement structure so it could be immediately used. A goal was set then by members to raise an additional $35,000, which was the amount, estimated to finish the full building.

In June 1927, a “Finance Association” was organized and such a spirit of giving was instilled in the members by the leaders of the “Association” that by October 1928 enough money was in the building fund (about $8,000) that it was decided to make a special citywide appeal for support. This drive was extremely successful as an additional $7,000 was added to the fund.

A Rock Island bank agreed to provide the needed financing for the balance needed to start the work on the superstructure of the building. Work was then begun. The dedication of the completed structure was held on May 19, 1929.

As one member said, “A seed falls upon fertile soil and grows”. Surely the seed has grown at Fifteenth Avenue Christian Church over the years due to the dedication and devotion initiated by those first charter members. Our church will continue to grow as long as there are dedicated persons willing to carry on the work of the Kingdom of the Lord.